In the news: Lead sarcophagus from Gabii 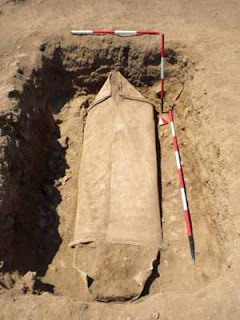 As has now been released to the press, an unusual Imperial Roman lead sarcophagus was excavated at Gabii in 2009 by the Gabii Project. This new story originated with a small feature by National Geographic News, along with a news release from the News Service of the University of Michigan. A sampling of the resulting press coverage can be found digested and linked here on our blog.
The sarcophagus, which weighs around 1000 lbs, is fashioned from sheets of lead folded so as to encase the deceased, thus the 'burrito' moniker that accompanied the news story and has become something of a popular tag on Twitter and other sites. The unusual nature of the sarcophagus comes from the fact that it does not follow the normal pattern for these objects - and indeed, only several hundred imperial lead sarcophagi are known. The sarcophagus in question here was formed by wrapping sheets of lead around the deceased, crimping the 'head' end and leaving the 'foot' end open and exposed. So, while the corpus of square lead sarcophagi with lids and lead sarcophagi liners is reasonably well defined, the lead-wrapped inhumant remains unusual. We are grateful for the offers of advice and help that are coming in from colleagues from all corners - thank you!
The next phase of study of the sarcophagus will begin shortly with non-invasive tests employed to ascertain something about the contents that are currently shielded by the lead wrapping, which in itself has important value as an artifact. The sarcophagus is heading for the American Academy in Rome in the next days where Mellon Professor T. Corey Brennan has been invaluable and incredibly supportive in facilitating this next phase of research. Prof. Brennan's blog entry is here.
This sarcophagus - about which we are still learning - prompts us to consider events at the far end of Gabii's life as an urban center and also raises interesting possibilities about studying a well-preserved (albeit unusual) status burial in Imperial Latium. While those in the blogosphere are hoping that we find a dangerous vampire, mummy or ancient demon inside, we're betting on a regular Roman, most likely of an elevated social rank.
The research at Gabii is supported by the University of Michigan and its Kelsey Museum of Archaeology, as well as by organizations that include the National Geographic Society. The kind support of the Soprintendenza Archeologica di Roma and, in particular, Dr. Angelo Bottini and Dr. Stefano Musco, is also gratefully acknowledged. We are also grateful to our friends at LAND srl who so carefully prepared the sarcophagus for removal from the tomb and transported it to safe storage.
THE SARCOPHAGUS 'IN THE NEWS'
U.S. media
Canadian media
U.K. media
Italian media
Asian media


Hungary and Romania
Other world and web-based media
Posted by Gabii Project at 14:57

I really liked your article. Keep up the good work.I love bondage sex

I feel really happy to have seen your webpage and look forward to so many more entertaining times reading here. Thanks once more for all the details.
occupational health and safety course in chennai

I have to voice my passion for your kindness giving support to those people that should have guidance on this important matter.
industrial safety course in chennai